A poster and billboard campaign has begun across North Yorkshire urging motorists to drive with the safety of pedal and motor cyclists in mind.

The county council, along with North Yorkshire Police, have launched a new ‘Think! Bike campaign with posters and hoardings displayed in urban areas and along popular cycling and motorbike routes. The first billboard went up in Harrogate this week.

With more cyclists expected to take to the county’s roads in the run-up to the Tour de France, the county council’s road safety team, in partnership with the police, are running a cyclist and biker awareness campaign aimed at motorists in an attempt to reduce the number of casualties. The purpose is to get motorists to drive with consideration for other road users, especially before turning or changing direction.

“It’s great to see people getting on their bikes to enjoy this beautiful county, take exercise and keep fit, but we want them to stay safe as well” said County Councillor Don Mackenzie, North Yorkshire’s Executive Member for Public Health and Member for Harrogate. “This latest initiative aims to tackle the problem of driver error in road casualties involving cyclists and bikers.”

The billboards and posters will appear throughout the months of May and June across the county as a warning to drivers to take care and take account of other road users.

The campaign comes in the wake of worrying statistics which show an increase in road fatalities. Across North Yorkshire the number of people killed in collisions in 2013 rose by more than 60 per cent on the previous year. The total of 51 deaths is the highest in seven years. The number of motorcyclists killed in road accidents more than trebled – from 5 in 2012 to 16 in 2013. There has also been an upward trend in pedal cyclist casualties over the last ten years– with the number killed or seriously injured rising from 47 in 2012 to 52 in 2013.

“We are urging drivers, motorcyclists and people riding pedal cycles to pay attention, not only to their own behaviour, but also make themselves alert to other people using the roads. Vulnerable road users such as cyclists and motorcyclists should also ensure that they have the most appropriate protective and highly visible clothing and equipment, said Deputy Chief Constable Tim Madgwick of North Yorkshire Police.

The county council is also working in partnership with British Cycling through their SkyRides programme to bring a host of free cycling opportunities to North Yorkshire intended to provide people with the information and training to get involved in safe cycling.

The authority is also urging clubs and informal groups and friends intending to cycle all or part of the Tour de France route, to plan ahead for any eventuality. County Councillor Gareth Dadd, North Yorkshire’s Executive Member for Road Safety added: “The more experienced riders have a role in looking out for the less experienced, less confident and perhaps less fit riders in their group. Cycles need to be in good condition with recently checked brakes and tyres.

“All road users have a duty to travel with consideration and with other users in mind.” 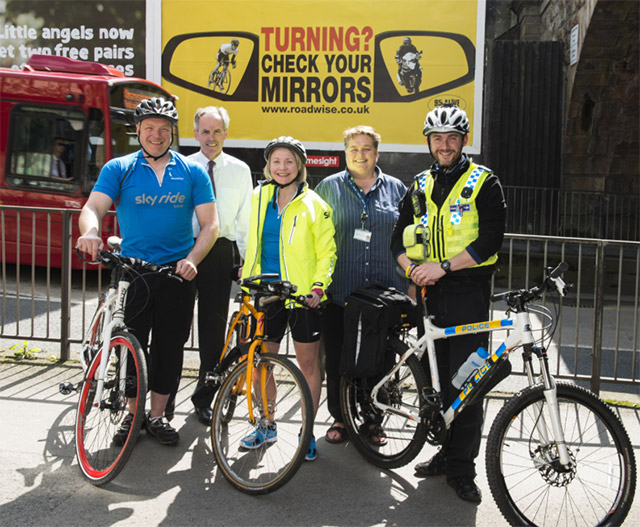